​The new issuance volume of small ticket bonds, i.e. bonds of less than EUR100m listed on the Extra Mot-PRO segment, in the first half of 2017 marked an historic low reaching just over EUR80 million, 72% lower than the volume issued in the same period last year (EUR290m). The number of issuers decreased to 17 from 28, while the average interest rate improved by 30 basis points reaching  4.3%, a record low since the segment launch in 2013; the average tenor remains almost unchanged at 4,8 years. The overall volume of small ticket bonds issued since market inception has reached EUR2,6 billion, while in accordance with the bonds’ amortization schedules, the value of repayments due over the 2H17-2020 period will exceed one billion euros.

Debt market performance for the second half of the year 2017 should fair better than the first half, but full year volume issuance may prove the lowest to date. The trend for 2018 is very similar to that of 2017: due to political uncertainty, the recovery of investment spending, the most significant driver of demand for new medium term debt, might only take place in mid-2018, after the expected elections in spring. Similarly the progressive reduction of liquidity injections by the ECB, based on current macroeconomics indicators, is expected only between mid-end 2018. "Only then, CRIF Ratings expect a recovery in the demand for capital market debt," commented Francesca Fraulo, Managing Direct of CRIF Ratings. 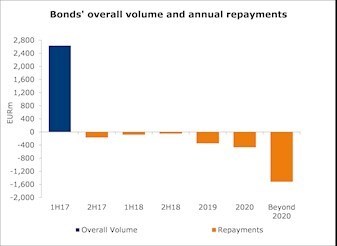 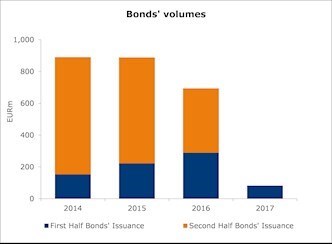 Since its start in 2013, the Extra Mot-PRO - a segment of the Italian domestic bond market dedicated to private small and mid-caps - the first half of the year has consistently seen lower volumes than the second half. The fall in volume registered in 2017, however, is not attributable only to a seasonality effect. Rather, it is in large part due to a combination of the competitive debt offering coming from the banking system, following the latest targeted long-term refinancing operations (TLTRO) tranche provided by the ECB, and the slow recovery in investments, tied to yet another Government turnover. According to CRIF Ratings, the combination of these effects  is the primary cause of the dampening effect on credit demand in the first quarter of the year.

On the supply side, it is important to note the arrival in the market of a new investment instrument, the Individual Saving Plans (PIR) created under the 2017 Budget Law (L. 11 december 2016 n. 232), which may have drawn investors' attentions towards the secondary equity market.  PIRs are instruments for retail investors that allow for complete fiscal exemption when held for a period of five years. They were created with the goal of channeling resources towards Italy's small and medium enterprises through a mandated diversification in asset allocation: 70% of capital invested must go towards financial instruments issued by Italian or European firms; the latter under the condition that they have a stable base in Italy. Furthermore, in order to take advantage of the fiscal benefits offered by the decree, 21% of the total must be invested in both bond and equity instruments issued by firms that are not included in the FTSE Mib, therefore SMEs listed in the Midcap, Star, Standard and AIM segments.

Based on price performance recorded in the past six months of eligible instruments for PIR funds, there would seem to be a significant shift in preference from debt to equity; additionally, it may be possible that the increase in equity prices registered since the introduction of PIRs could lead to a potential market  bubble due to a scarcity of eligible instruments for the underlying PIR portfolios. The 30% plus market performance in past 6 months cannot be fully explained based on market fundamentals which are marginally better than the previous first half results.